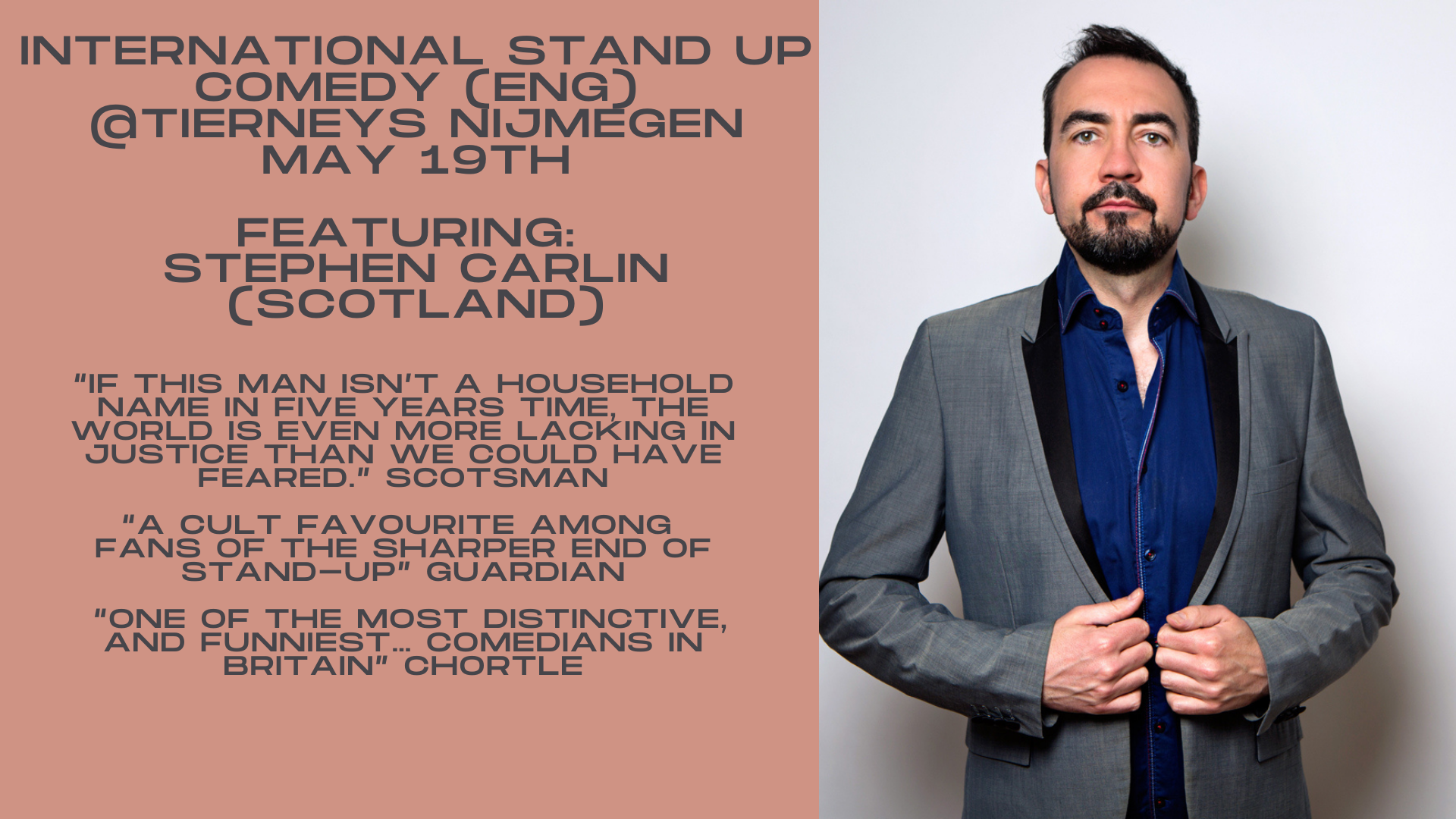 Tierneys Nijmegen on May 19th is going to be a special and hilarious one!  Featuring headliner Stephen Carlin i(Scotland) doing one night only in Nijmegen do not miss your chance to see this comedy legend in action.
As seen on BBC’s “Comedy Underground” and Comedy Central’s “Alternative Comedy Experience”, Stephen Carlin has gained critical acclaim and a growing fan base with his original, insightful material and his accomplished delivery. He is increasingly expanding his following on the international comedy scene performing this year across Asia and Europe.
Chosen as one of Stewart Lee’s “Ten Best Stand Up Comedians Ever” Carlin has supported Stewart Lee, Stephen Merchant & Tom Stade on their British tours.
As always, Carlin’s art lies in his ability to quarry wildly original material from the most conventional of starting points. By taking run-of-the-mill observations and then applying his relentless but warped logic. This married to his exceptional use of language and his brilliantly opinionated broadsides make for memorable routines. All skilfully delivered in his deadpan Scottish brogue.
Stephen is an experienced writer and has written for many BBC Shows including the Now Show and the Newsquiz. He is the author of a Comedy Blog, which hilariously exposes the many facets of a life lived in comedy.

“This is laconic laced with Red Bull, material so thoughtful you would put your house on (him) reinventing the knock knock joke... announcing the arrival of a new comedy original.”
Herald
One of the most inventive stand-ups on the Fringe..... knowingly cynical and hilarious ... delightfully deadpan Scot " Chortle
“If this man isn’t a household name in five years time, the world is even more lacking in justice than we could have feared.” Scotsman
“A cult favourite among fans of the sharper end of stand-up” Guardian
“One of the most distinctive, and funniest… comedians in Britain”  Chortle
"this capacity crowd [was] falling at Carlin's feet.”Gigglebeats
“A great comic mind at work” London is Funny
“A fierce Invention at Play” The List

MC is the wonderful Nijmegen funny man Zuva Martens and support acts to be announced!